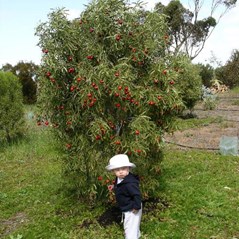 Uses: Highly ornamental small tree for shade or shelter. This species is a parasite and survives off the roots of other plants. Tolerates poor soils and hot dry sites.
Attracts native birds and butterflies and is a food source for butterfly larvae.
Cultural use: Fruits eaten by indigenous peoples. Now popular as a bush food.