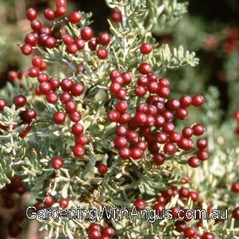 Uses: An excellent plant for soil erosion control and reclamation, particularly in coastal parks and reserves.
Spiny foliage can be pruned heavily.
Food source and refuge for birds, lizards and small mammals.
Cultural use: Large quantities of the fruit of this species were used as a food source by indigenous peoples.
Note: Although this species is not classified under the Sewerage Act, it is recommended that it not be planted closer than two metres to any sewer main or connection.